It’s been a few weeks since the last ECW on Sci-Fi recap due to my hard drive dying and getting locked out of The Blog Of Doom so I’m glad there’s a news-worthy episode or this would have been ”Savio Vega at NWO 1998” levels of anti-climax.

It’s the show after Night of Champions but that’s only half the story: Around sometime the week before the show, Michael Hayes got drunk on doot-doot-doot and declared he was ”more of a N-Word than you” to Mark Henry, who somehow didn’t see the funny side of the N-Bomb being dropped by a guy that used to wear the Confederate Flag on his face
Henry then reportedly told the higher-ups that either Hayes went or he did, resulting in Hayes’ suspension and Henry winning the title at NOC. Henry’s title win gets a little weird in terms of figuring out what was due to Hayes and what was already planned ahead of time as Henry’s involvement was only mentioned on the WWE website days before the PPV (on the go-home show it was still announced as Kane vs. Show) but champ Kane had been drafted to Raw and Show was sticking on Smackdown so having still-ECW Henry get the title off Kane made more sense than the (presumably) original idea of having Show win. Or maybe WWE accidentally fell into a good booking decision, I dunno.

Oh and Kofi Kingston got to beat Jericho for the IC Title. Maybe it’s unfair to lump in Kofi’s win with this whole Fabulous Free Birds situation because Jericho didn’t need the IC Title during his red-hot HBK feud so anyone would have benefited from the win…even a guy who had only been with the company since January and happened to be black.

So with these title changes, ECW on Sci-Fi is now home to FOUR of the champions in WWE, which is a hell of a deal for the C-Brand. 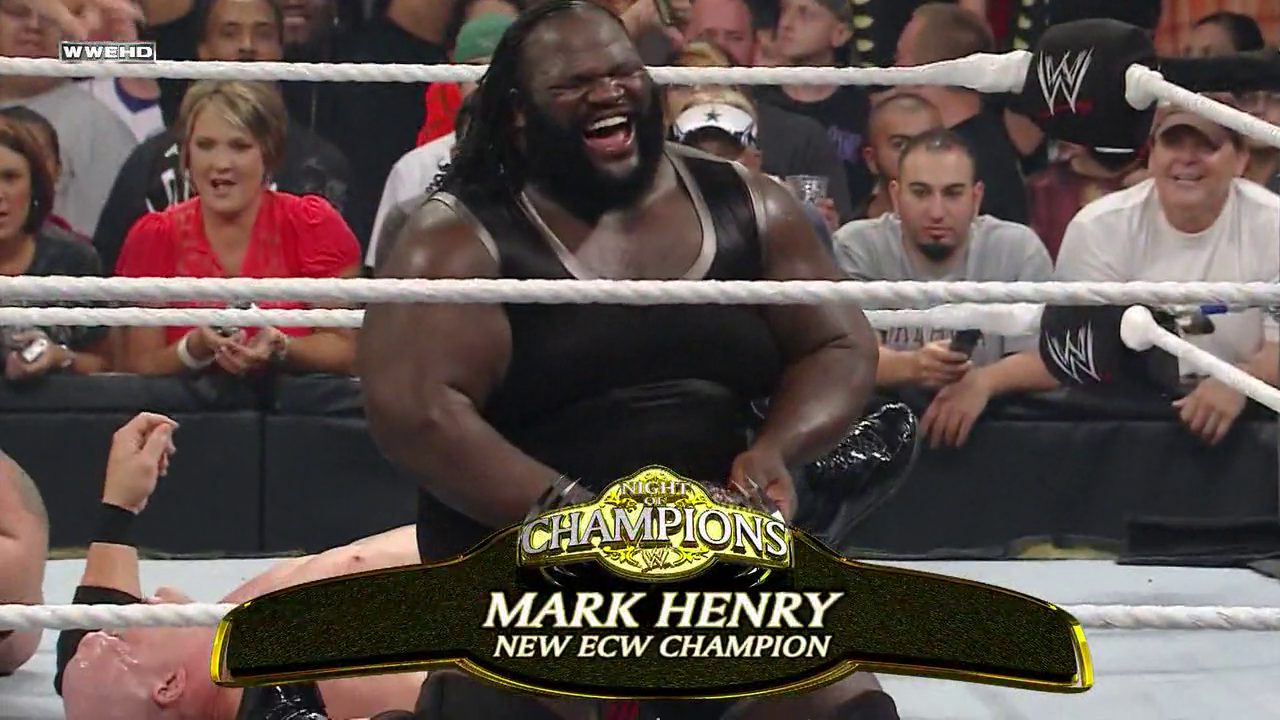 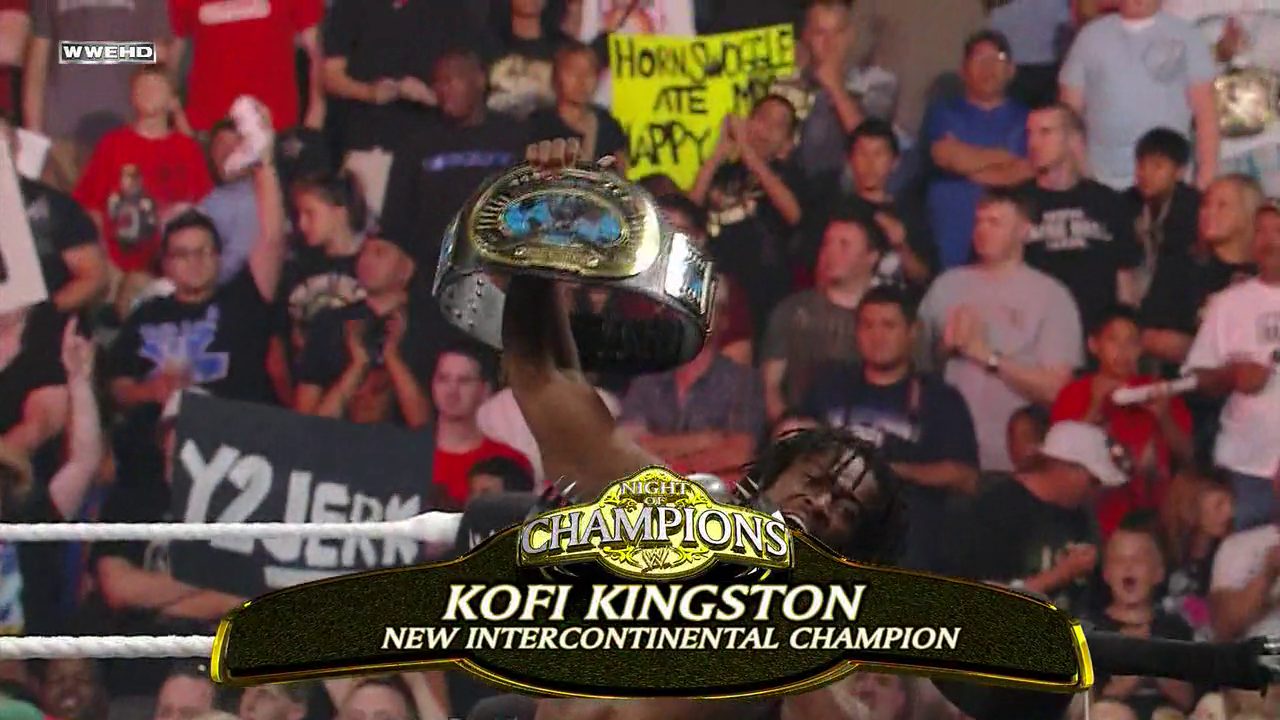 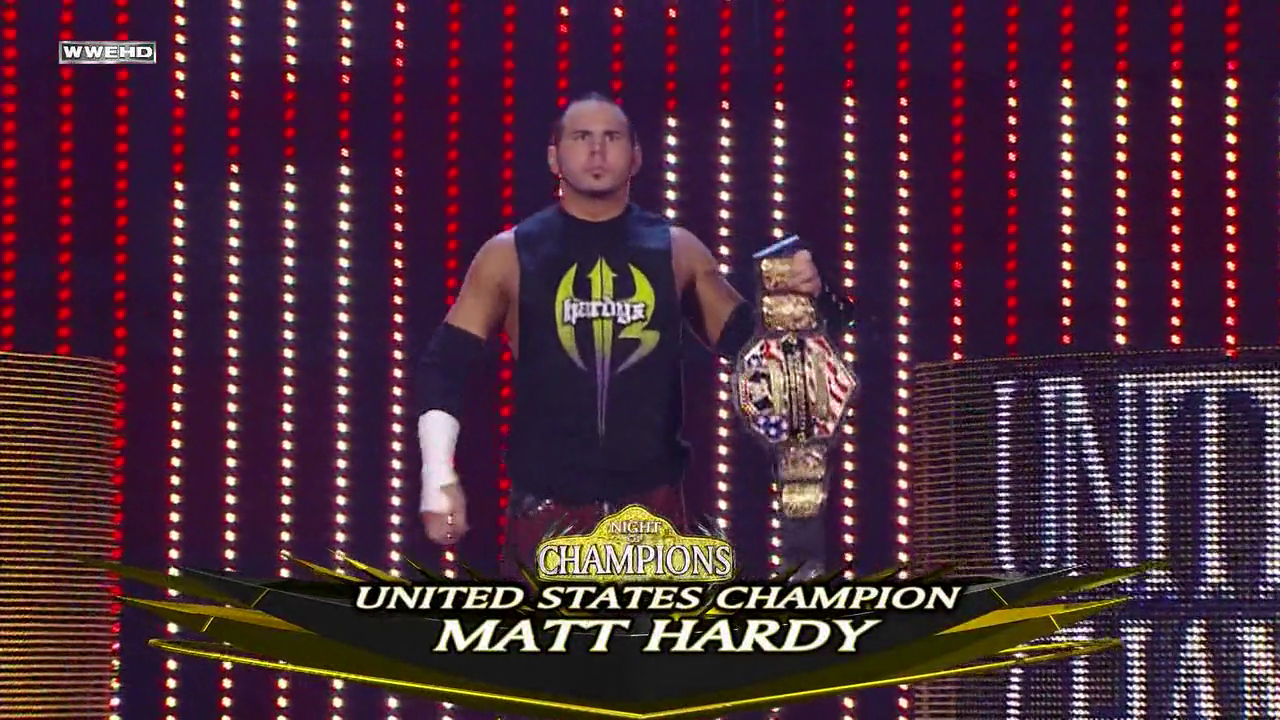 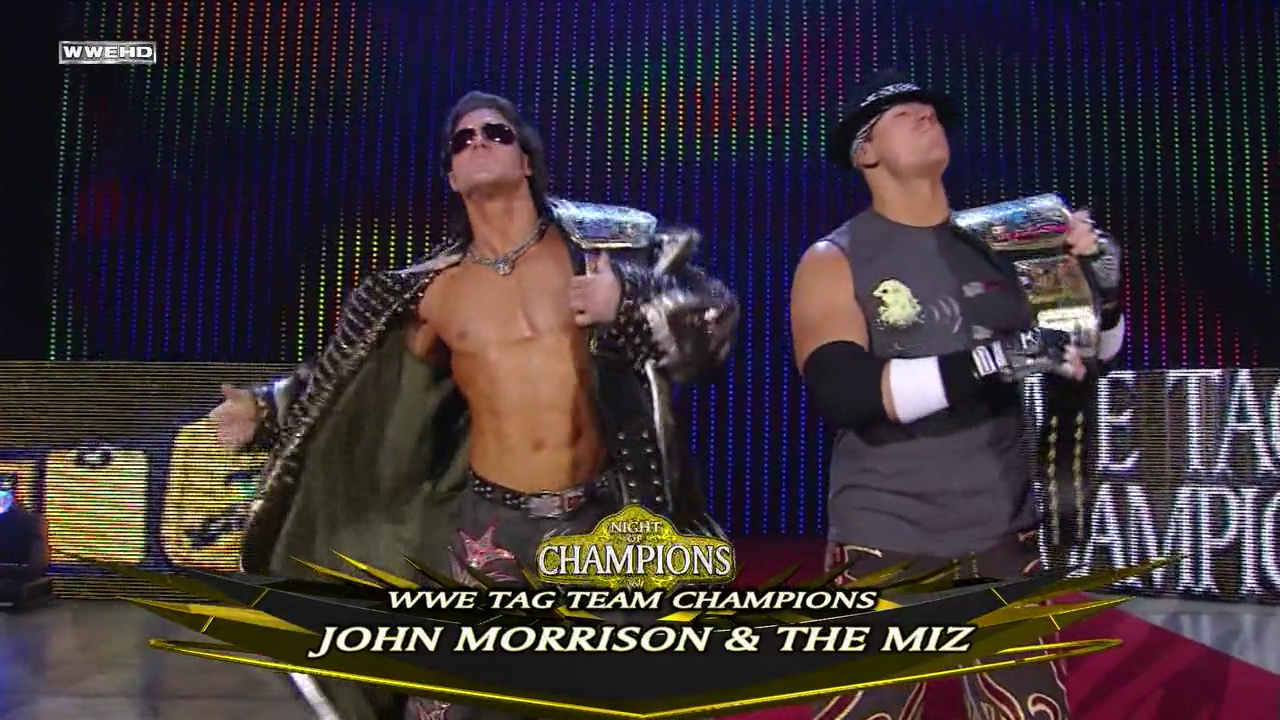 And if that wasn’t enough, the just-drafted Punk cashed in MITB on the Raw after NOC to beat Edge and give the Raw brand a title now that HHH had buggered off to Smackdown with the WWE Title. The surreal sight of the Indie Darling holding the World Title would sadly be the only highlight of a truly miserable title reign as the world (and creative team) forgot he worked there like Milton in Office Space until he lost the title in a match he wasn’t allowed to be involved in at Unforgiven a few months later. 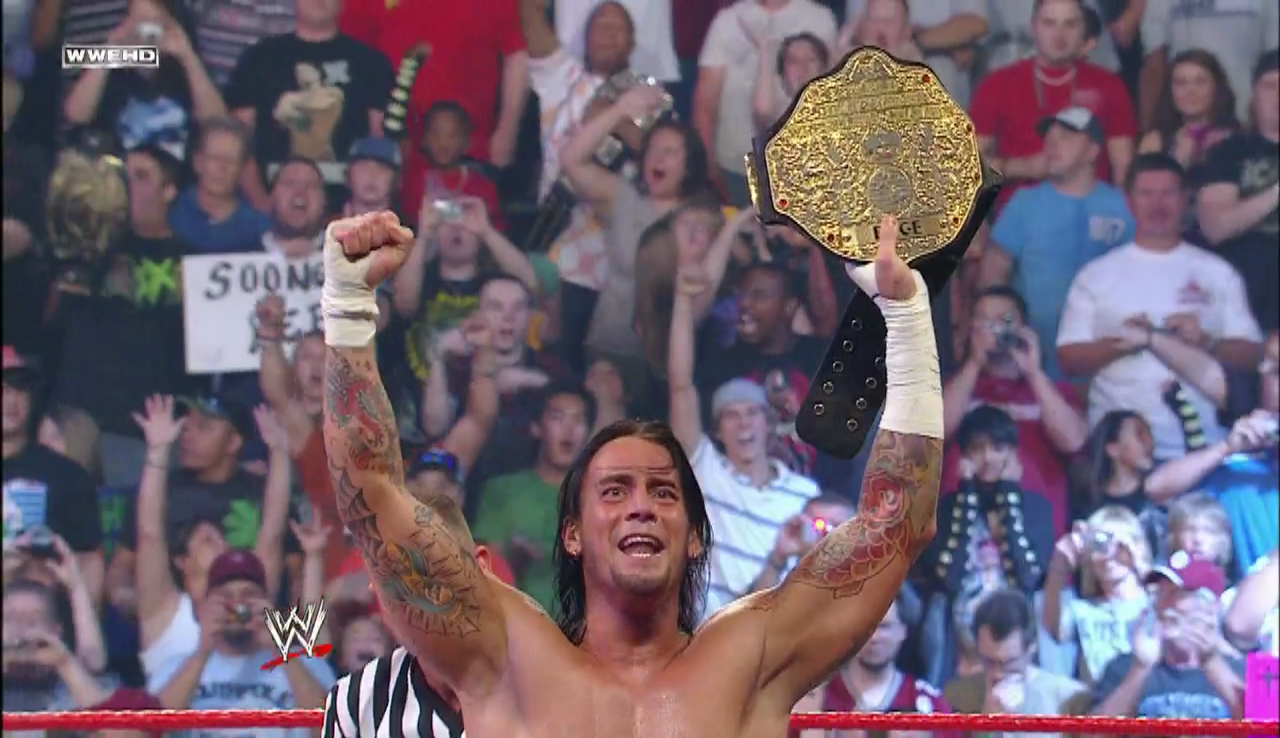 And after all that, there’s still an episode of ECW to get through in Tulsa, Oklahoma. Mark Henry starts the show and proclaims himself to the saviour of ECW and doesn’t say much else. Tommy Dreamer interrupts and reminds everyone he’s more ECW than Henry because he broke his back and walked ten miles to school every day etc. Henry is so impressed he says Dreamer can get a title shot…if Delaney beats Henry tonight. Henry’s delivery on the mic is improving, but his lines are still ME CHAMP, ME BIG.

The trend of putting Hornswoggle in normal matches continues. ”Dad & son having fun!” declares Tazz. Matt & Miz start off with armdrag takeovers on one another with Matt getting the best of it following a running bulldog. Finlay tags in and clotheslines the life out of Miz who tags out to Morrison who takes more of the same. Chavo tags in and takes over Finlay. it’s been a while since I’ve thought about Chavo but I forgot how much the crowd hates him. Chavo tries a baseball slide to Finlay but he wraps him in the apron sleeve and pounds him and when Morrison & Miz try to intervene Hornswoggle flies off the apron AND WE GO TO BREAK.

When we return, Matt is being worn out by Morrison’s athleticism and Miz’s er chinlocks. The chants for Matt and the build for the hot tag is being eaten up by the crowd and when Finlay tags in and starts beating up Chavo they go BANANA. Finlay Roll to Chavo, Twist of Fate to Morrison, Tadpole Splash to Chavo, shillelagh to Bam Neely and Celtic Cross to Chavo ends it.

Winners: The Goodies (Nice, simple multi-man tag that had the crowd eating out of the wrestler’s palms. Hornswoggle did two things but did them well and Matt Hardy is the most over guy on the roster now Punk has left.)

RAW REBOUND: Punk cashes in MITB! And then JBL challenges him while feuding with Cena so Punk gets beat up until Cena and Cryme Tyme (remember when Cena had friends?) and Punk gets the cheap roll-up, thus starting a trend of shitting finishes from a shitty champ.

Backstage Teddy Long welcomes the newest member of the ECW on Sci-Fi roster as part of the New Talent Initiative: Atlas Ortiz! Armando isn’t impressed so Teddy sets up a match RIGHT NOW. 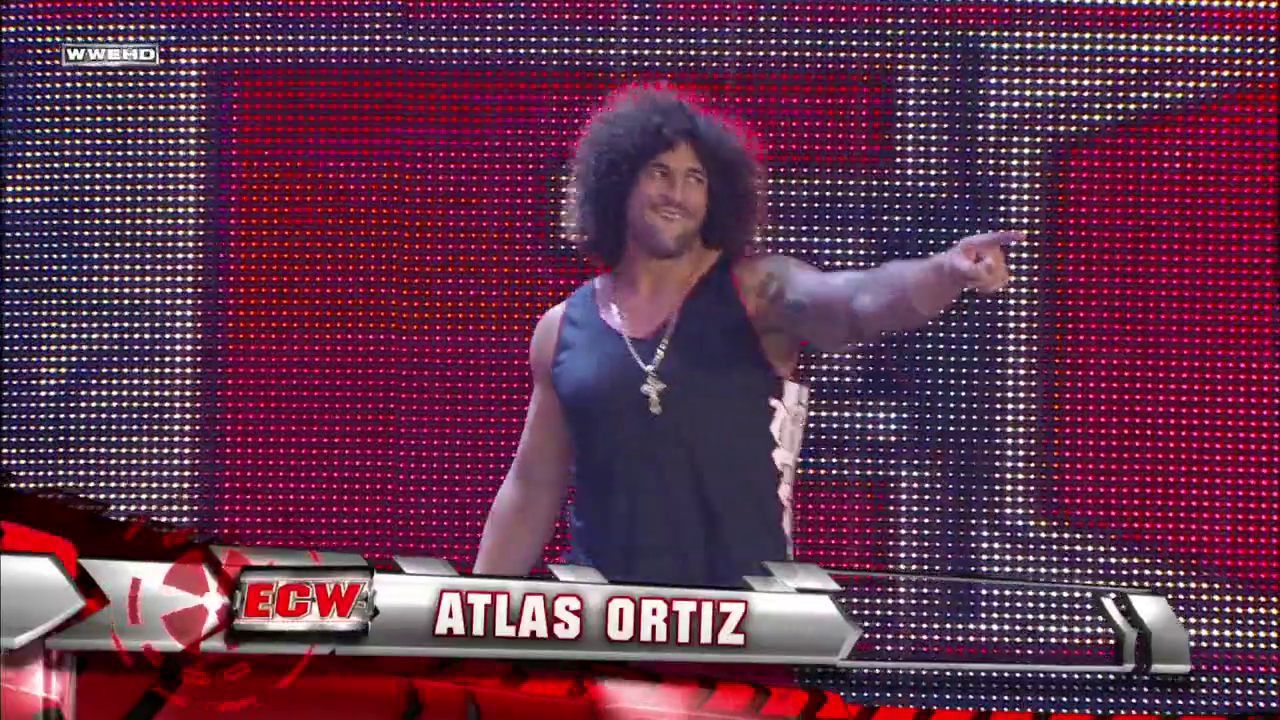 The debut of Ortiz. Taz: ”Smoke’s coming off of this guy’s body!” The crowd is loud to begin but dies when Armando takes over. Ortiz attempts a Three Point Charge but hits the corner. DDT to the afro is sadly sold by Ortiz. He should have come back the following week bald but with a metal plate like the dude in Mr. Nanny. Armando continues to wear down Ortiz and the crowd only reacts because they realise if they don’t the chinlocks will last forever. Ortiz used to be in the XFL but for whatever reason Tazz & Adamle only refer to him as an ex-football player. Is that on the banned words list? Ortiz gets stuck in another chinlock as the fans sign their DNR forms. Ortiz eventually escapes and ends following a big dropkick and a quick backslide pin.

Winner: Atlas Ortiz (Way too long for a debut match with someone greener than goatshit. Didn’t help that Armando had to remind the crowd they’re supposed to hate him.) 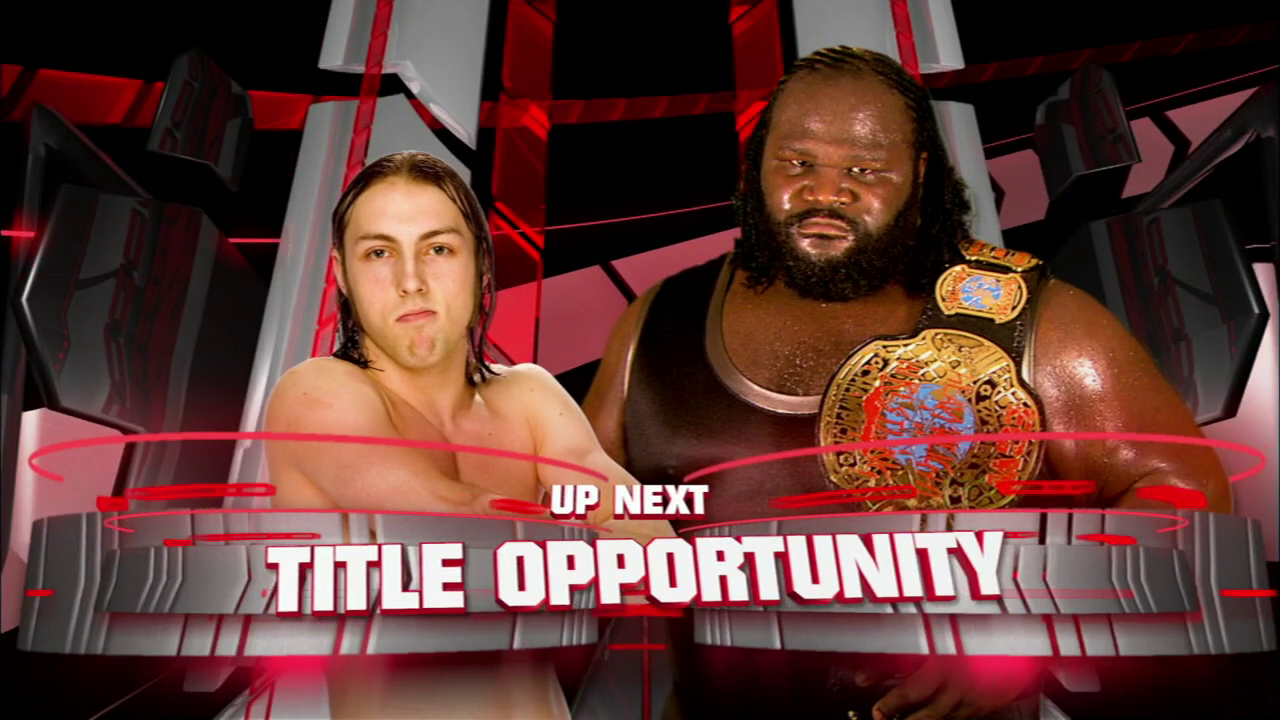 I’ve definitely seen the above image on the cover of some VHS before AND ANYWAY Henry attempts to remove Colin’s hair with his feet but Henry gets cocky and misses a standing elbow drop which allows Colin to get a quick series of shots. Which is immediately ignored by Henry who knocks Colin down with a third of his forearm. A big headbutt sends him down and Henry nonchalantly sends Colin packing with the World’s Strongest Slam.

Winner: Mark Henry (Match was exactly what it was supposed to be.)

Overall: The backstage drama and news overshadowed an inoffensive episode of ECW that gave us a solid six-man tag match, Ortiz’s debut and fuck-all worth GIFing apart from Bam Neely getting twatted.

I’ve been Maffew and will still sadly be that way after this review.