After winning last week, Colin Delaney is officially part of the ECW on Sci-Fi roster. Armando gives him his new contract and books Delaney vs. Knox for tonight. Sadly Delaney didn’t sign it like Arnie in The Running Man.

CM Punk vs. The Miz

This Sunday it’ll be Punk & Kane vs. Miz & Morrison for the tag belts at Judgement Day in one of those ”two birds with one stone” booking decisions to get the titles defended and give Kane & Punk something non-Chuck Palumbo related to do. Punk takes Miz down with a waistlock and keeps Miz grounded. Early Sunset Flip gets two for Punk but Miz and his Final Fantasy shorts take over with stomps. Miz’s offence in singles matches is based around getting the crowd to boo which would be OK if the crowd weren’t sitting on their hands. After some chinlocks, Punk summons the strength to kick Miz in the head a few times with those Mike Jackson-style kicks. Miz and Punk nearly start doing the Malenko/Guerrero pin sequence but sanity prevails and instead Miz counters the GTS to the Reality Check for the surprising clean pin. 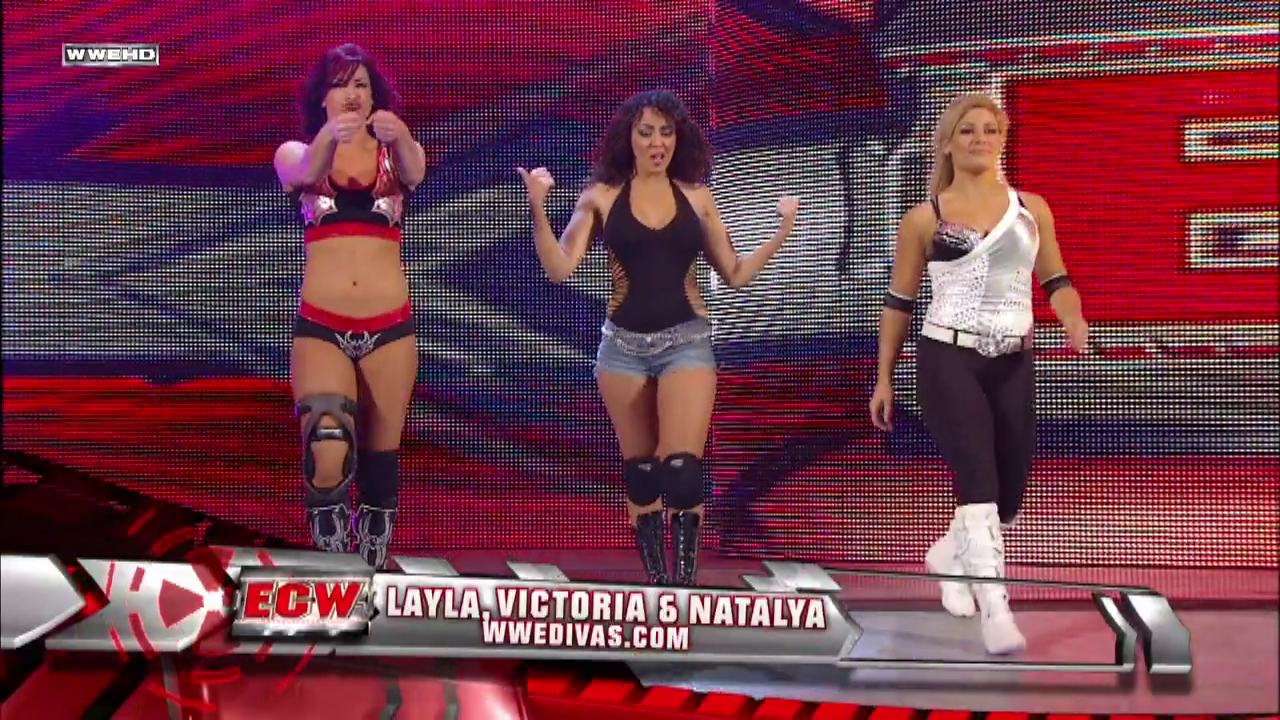 This is Natalya’s ECW debut, weird seeing her in the company this early. She’s been around longer than the butler from The Shining. Adamle gets Kelly & Michelle mixed up but that’s forgivable, they were made in he same factory. Some stuff happens until Nat gives Cherry a hard clothesline. The greaser gets beat up as Tazz explains she was told to ”hit the bricks” by Deuce & Domino so she’s face by default, I guess. Crowd’s half-buying it. She gets triple-teamed for a bit before getting a quick roll-up on Victoria to win.

Winners: The goodies (This was the first half of a passable match with an abrupt finish. Of vague interest for people who want to see the very brief Cherry turn that went so well this ended up being her only ECW on Sci-Fi match before getting released in August.)

Backstage, Shelton is still salty about losing to Kofi but promises he won’t lose again. Kofi hears this and leaves him laying. Well done Shelton. 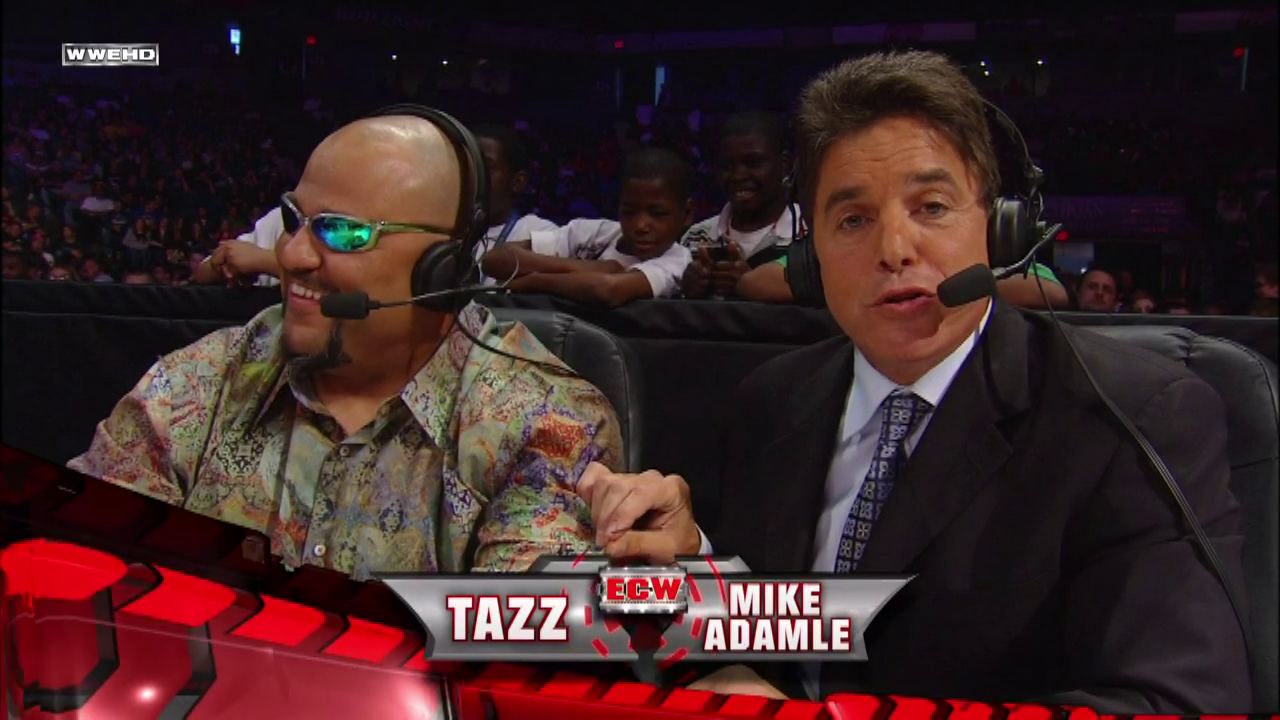 ”I’m here with The Tazz who is dressed like a TV test pattern.” Adamle ruins his one good line by forgetting what happened with Orton and HHH on Raw so The Test Pattern has to bail him out. I think HHH vs. Orton was thrown together after the Regal fall-out anyway but it’s in a STEEL CAGGGGEEE so it’s important-ish.

Crowd stand up in approval for Delaney who now has music. He tries a few dropkicks on Knox but it doesn’t work for some reason. Knox clotheslines him a few times and ends it with the Hard Knox/Knox Marks The Spot/Knox Gon Give It To Ya/whatever it’s called this week.

Armando Estrada shows up to congratulate Delaney for his first match but now he has to wrestle the newest member of the ECW roster…”me!” He said he signed himself to a lucrative contract. Why didn’t Daniel Bryan think about doing that? 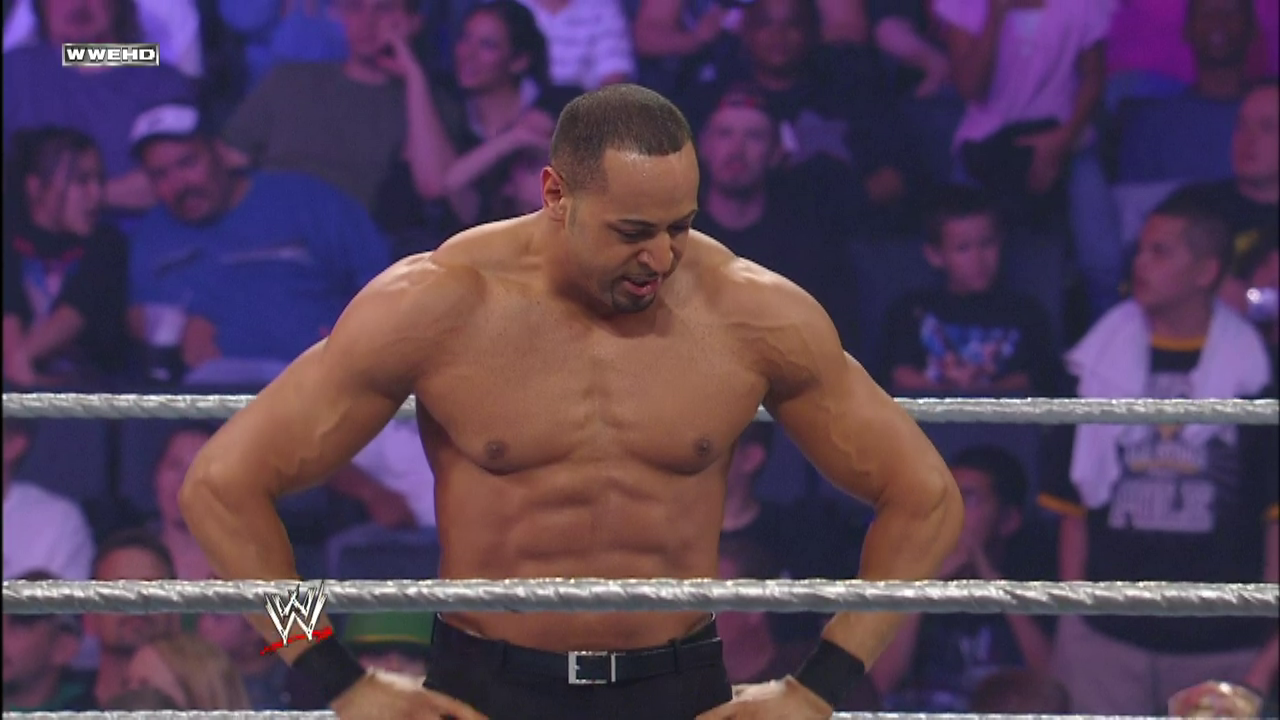 Winner: Androgen Estrada (Armando-sized boos for Estrada being a dick to Delaney, the biggest reaction so far tonight so I approve.) 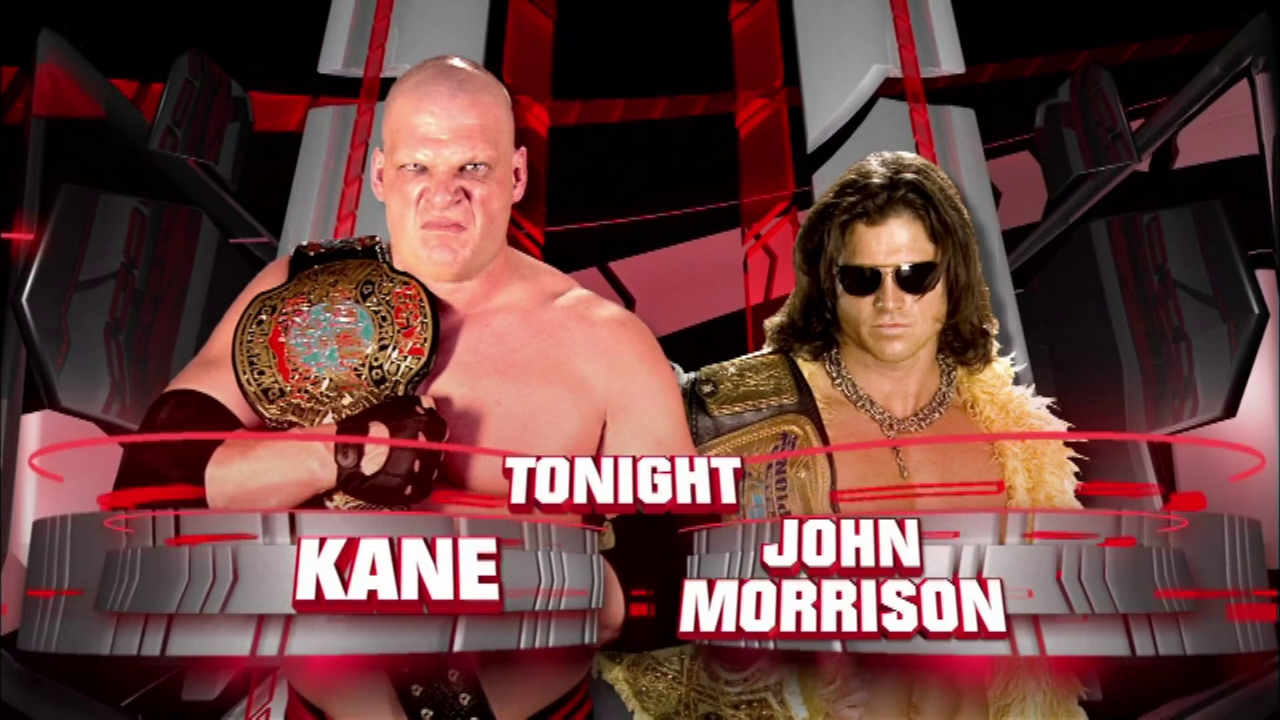 Morrison tries to use his speed to start but didn’t get the memo that Kane always wins to start. Kane throttles Morrison while holding him over his neck, which Morrison makes even better by landing flat-out afterwards.

Dude is a machine. Miz holds Kane’s leg so Morrison can get the advantage…oh wait it’s Kane so he turns around and levels Morrison. Punk comes out to make it a fair fight (or rather ”a unfair fight more unfair”) and I think someone missed a cue. Back from break, Morrison is still getting beat up. This carries on until Morrison gets a few leg-locks and Kane is finally hurt after getting hoofed in the calf Inoki style. Lots of kicks and leg-locks until Kane realises he can carry on by hopping. One-legged sidewalk slam gets two, as does a Fall-Off-The-Top-Rope-And-Land-On-One-Leg-And-Hope-You-Don’t-Sid-Yourself clothesline. Punk decides to take out Miz but he gets dumped into the steel steps which distracts the ref so Morrison hits Kane with the tag title to get the pin.

Winner: John Morrison (Not an exciting match, to say the least. Kane no-selling Morrison is as thrilling to watch as watching Morrison applying leg-locks for minutes on end.)

Post-match the tag champs continue to beat up the ECW Champ and the MIB owner and walk away, establishing that Punk and Kane may have the advantage in singles matches but they’ll be against the tag champs on Sunday so…wait. Ah fuck it now I’m too confused to watch Judgement Day so I’ll give it the care and attention WWE gave to it and watch it next week. 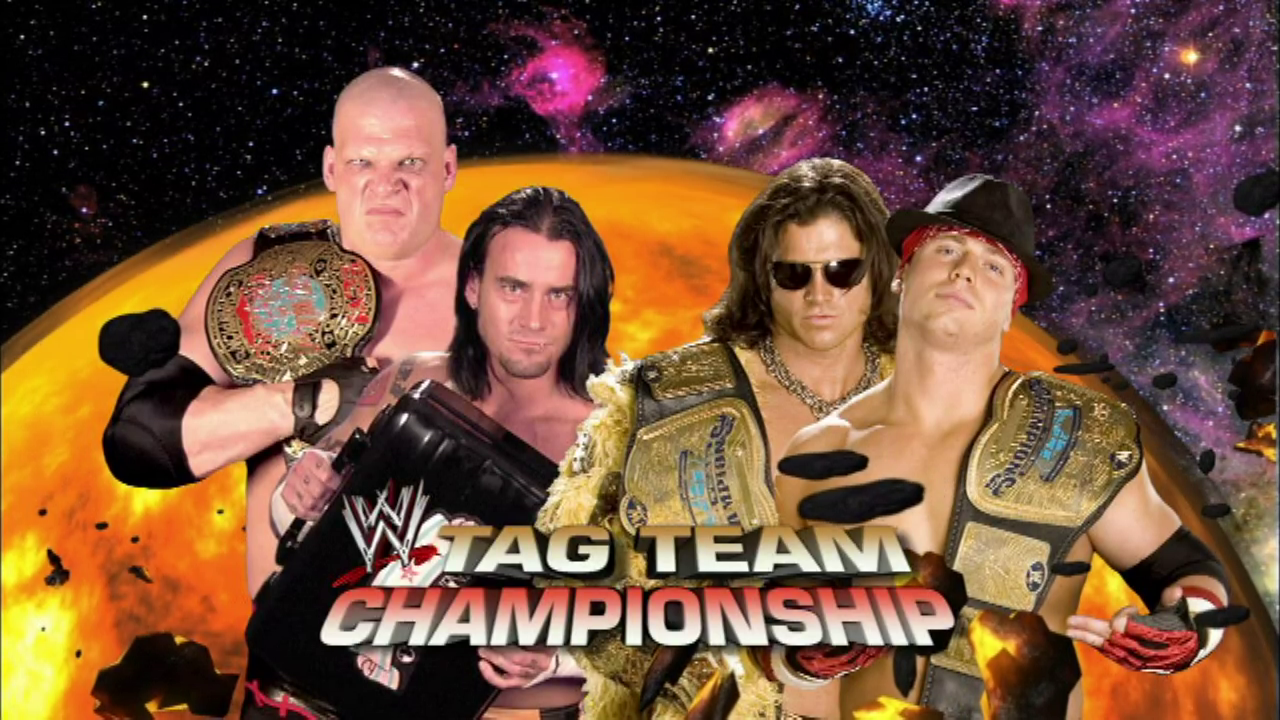 Overall: Yeah you can skip this episode. WWE were too focused on this nothing-arse PPV (I forgot about the manic three post-PPV shows in 2 months schedule of Backlash, Judgement Day, One Night Stand) to get anything meaningful together so skip unless you’re a really big fan of Cherry.

I’ve been Maffew and I’m going to use this time to plug OSW Review because they’re lovely and I spent five bastard hours talking about Wrestlemania with them.