We’re in Fayetteville, NC for the last episode before Wrestlemania with ”maybe the biggest tag team match we’ve ever seen” involving all twenty four men involved in the Battle Royal.

Thanks Cagematch for making my life easier. Only Kane, Hardcore Holly, Cody Rhodes and Kofi get entrances. ”Can you imagine trying to go and find 11 men to be your partners in the original ECW?” asks Joey. ”I don’t think we had 11 men in the original ECW!” replies Tazz. Cody and Kendrick start off with fast-paced pin attempts as the fans struggle to see the action due to the amount of man on the apron. Noble in until Palumbo The Biker makes a blind tag. Wang Yang takes a huge overhead belly-to-belly suplexes but ignores it to plant Palumbo with a Frankensteiner off the top. Wang dives outside onto Palumbo and everyone else follows, including Trevor Murdoch who I didn’t realise was still around. We return from break to Dreamer DDTing Snitsky and it all breaks down like a bar brawl in a cowboy film. Kofi takes out Deuce & Domino with a crossbody, Holly delivers the Alabamma Slamma to Burke, Festus butt-slams Miz, Khali chops everyone until Kane upperchops him, Striker takes a chokeslam. Crowd’s getting louder and louder for every move until Snitsky’s Bennett From Commando Kick kind-of connects and the crowd deflates.

Winner: ”Snitsky and his team” (A bag of moves with no saturated fat.)

Even more hype for Mayweather vs. Show, with legends like Roy Jones Jr., Evander Holyfield, Antonio Tarver and Ricky Hatton (hey, he’s a legend to me) weighing in on the fight. ”I’m buzzin to see our kid Big Shurrr hurt th’ daft ‘apeth.”

Chavo mocks Dreamer backstage for trying to wrestle a pointless match tonight when there’s a Battle Royal on Sunday. Dreamer challenges him to a match later today but Chavo laughs him off. He tells Colin to shut up so Dreamer yells YOU’VE NO PROBLEM BULLYING A DUDE WHO’S BEEN IN THE BUSINESS A FEW MONTHS BUT YOU WON’T FACE ME? and Chavo’s like YEAH MATE, GOOD POINT so it’s on.

There’s no ladder but there is a briefcase hovering above the ring. They should have dangled a sign saying ORDER WRESTLEMANIA PLEASE instead. Shelton lands on his feet after a monkey flip and Carlito does the same after a hip-toss attempt. Shelton skins the cat after a ring injection but Carlito clobbers him. Shelton tries to springboard in but Cool stunners him on the ropes. That was nifty. Shelton tries again so Carlito DDTs him on the ring apron. Crowd were building interest but a long chinlock cuts that off. These two guys are fine executing cool-looking spots but struggle to fit them together for a cohesive match, no wonder they were kept around for matches like MITB. This chinlock lasts forever until Carlito hits a springboard elbow. ”Touche as they say in chess!” remarks Tazz. Carlito locks in another painless hold until Shelton powers out with an Electric Chair Drop. Carlito executes a springboard dropkick for a close two. Another Heat Death Of The Universe chinlock motivates Shelton to start taking down Carlito and he gets a two off an Exploder. Carlito blocks the spinning enziguri and the suplex-neckbreaker and a whirling neckbreaker from him somehow doesn’t end the match. Shelton gives Carlito the Sting-Killer Running Powerbomb but Carlito sees the Paydirt coming and counters to a backbreaker. Alright THAT was cool. Carlito scales the ropes but Shelton Spider-Man runs up and kills him dead with a Top-Rope Paydirt.

Winner: Shelton Benjamin (The spots were over but the guys weren’t. The last few minutes made up for the wandering around and hitting aimless spots but this match made me wonder if Carlito ever good in the ring or do we only remember the promos and springboards? Shelton looked impressive in his kind-of-a-push-but-not-really.)

Gordon Solie (complete with black and white promo pic) is the next induction into the 2008 Hall Of Fame.

Did this match travel from 2006? No fucking pop whatsoever for Stevie, I miss that three-week push and sadly him so did the crowd. Layla and Kelly exchange hammerlocks. ”Every week she gets better!” because she can’t get worse. Knox trips up Kelly as the ref is distracted and Joey off-handily mentions that’s not a nice way to treat your ex. Hot-ish tag is made to the men and Richards takes down Knox with some kicks. Layla makes the save but Kelly drags her outside so Knox gets the Knox Out to win.

Winners: Layla & Mike Knox (Kelly didn’t fuck anything up but Knox is getting wins on TV to balance that.)

Rather than recap yet another Mayweather video package here’s a pic that summaries him. 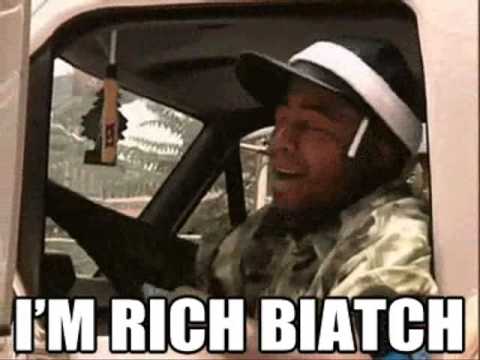 It’s non-title and the Battle Royal entrants are surrounding the ring. Commentators are no longer saying the winner faces Chavo immediately after the match like in previous weeks so I’m glad someone had a word. Chavo gets sent outside but the not-lumberjacks help him inside. Chavo chinlocks Dreamer as the crowd are loud with the CHAVO SUCKS chants. Dreamer gets the Tree of Woe but Chavo holds the ropes like Larry Holmes when Dreamer tries for the DDT. Dreamer gets crotched and dumped off the top rope and Chavo wins clean with a Frog Splash.

Show ends with Chavo celebrating with his title before realising all his enemies are around him.

Well while we’re here we might as well recap the ECW on Sci-Fi related Wrestlemania stuff. Kane won the dark match Battle Royal

Kane won the dark match Battle Royal to earn this shot. I’m not going to track it down as it’s a frigging Battle Royal but he eliminated Mark Henry to win. He surprises Chavo by entering behind him and wins easier than Groves against Eubank Jr.

Winner and new ECW Champion: Kane (Chavo’s directionless reign as Champ is over. Originally a prop for Edge, he had two bright spots with Punk (Gulf of Mexico and MARIACHI SNEAK ATTACK) but creative couldn’t decide if he was a sneaky fuck or a good wrestler who you happened to dislike.)

In a decision that would have a long-lasting impact for the main event scene, ECW branded CM Punk surprisingly won the MITB ladder match.

But we’ll get to the negatives later, for now let’s remember the feeling of HOLY SHIT THE SKINNY FAT ROH DUDE WON SOMETHING IMPORTANT, IT CAN BE DONE.

Overall: Hopefully this is the end of the ”treading water” period for the brand now the biggest show of the year has come and gone and they can stop being treated as an afterthought now they have the tag champs and the MITB winner on the show.

Anyway, I’ve been Maffew and Botchamania 361 is still a thing.