Since I watched this on NJPW World and know approximately three words in Japanese, this ought to be interesting. Also, this was dubbed “Starrcade ’91 in Tokyo Dome” so if the real Starrcade ’91 sucks, WCW didn’t recruit enough Japanese wrestlers.

Summary: Decent opener with some excitement.

Summary: Great workrate with lots of high-flying. At 25 years of age, Iizuka was the young up-and-comer who overcame adversity.

Match 3: Scott Norton versus the Equalizer

Summary: Equalizer had barely a year of experience under his belt and it showed.

Summary: Fantastic match that not only showed off Liger’s repertoire but also his selling ability.

Summary: Chono and Arn did the heavy lifting while Saito and Windham got their $.02 in. All in all, it was solidly entertaining.

Summary: Superb tag match where three of the four wrestlers went balls to the wall. Also, it was truly remarkable having the Steiners draw heel heat from the Tokyo faithful due to Hase’s popularity.

Summary: Despite the short match, El Gigante amazed the Tokyo faithful with his size and charisma.

After the match, Reed WALLOPS Simmons from behind which becomes a brawl. When Simmons knocks him out of the ring, Reed tells him that “(he’s) through with (Simmons).” Greg Kihn would be happy.

Match 9: Sting versus the Great Muta

Summary: Truly striking that the use of green mist didn’t result in a disqualification. On the other hand, the somewhat clean finish made more sense. Not surprisingly, these two have amazing chemistry due to their 1989 feud.

After the match, Sting gives Muta a Stinger splash and hooks the Scorpion death lock. Both NJPW and WCW wrestlers run in to break the hold. So THAT’S why they were at ringside.

Summary: Pure definition of a blood feud with a solid finish.

After the match, Chosu tosses the referee out of the ring and hooks a Fujiwara arm bar on Singh. Methinks Chosu prefers Japanese curry to Indian curry.

Summary: While there was some miscommunication between the wrestlers, the Flair formula held it together for a worthwhile main event. On another note, does the over-the-top back drop create controversy? 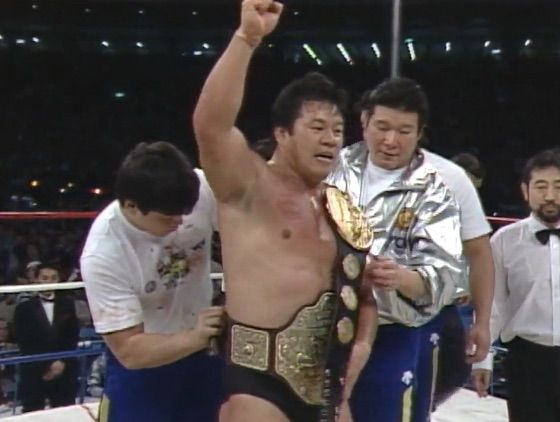 Conclusion: Absolutely phenomenal show with several good to great matches. Check this out yourselves, and then let’s find out how WCW handles it with their next PPV.