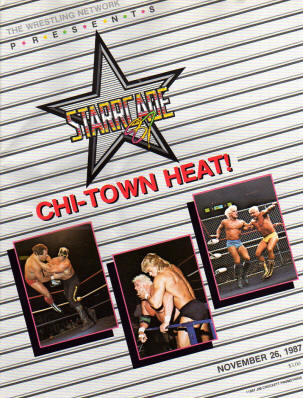 Since 1983, Starrcade had been an annual tradition for Jim Crockett Promotions. However, by 1987, Vince McMahon was steadily knocking down the smaller territories (e.g. AWA, Stampede, etc.) yet still wanted to hurt the WWF’s biggest rival where it hurt the most as well.

So, in the first of many battles between the WWF and JCP, he held Survivor Series on the same night as this show and strong-armed cable companies using WrestleMania IV as leverage for exclusivity. Mind you, this was Crockett’s very first PPV. OUCH!

Summary: Exciting match that showcased everyone, but a Sting pin would have brought the house down.

After the match, Sting gives Rick a Stinger Splash to a raucous ovation. I think this guy might be an up-and-comer.

Backstage, Missy Hyatt stammers over her lines then throws it back to Tony.

Summary: That accident to Williams must have caused them to go home early. Six minutes wasn’t enough for two wrestlers who can go thirty easily. Rightfully so, the crowd booed the decision.

Summary: Not much can come from this type of match other than serious injury upon falling.

After the match, Rogers climbs up to the scaffold and tosses the racquet down to the mat. In order to escape, Morton nails Rogers down in Southern Cobb County and climbs down the ladder. When Morton gets down to the mat, he wears Rogers’ hat and coat to mock him.

If you’re wondering why there is such a delay here, they needed time to take down the scaffold.

Summary: Predictable finish for a match that I expected to be shorter.

Also backstage, Caudle interviews unified World TV champion Nikita who sports a decent shiner after his match against Taylor. While being a proud champion, he wants to become World champion someday. Afterward, Caudle interviews Dillon about the upcoming US title match.

Summary: While Rhodes walked Luger through the match quite well, there must be further story development for his not-putting Luger, who was considered the next big thing, over.

After the match, Rhodes leaves the cage and embraces Weaver while a frustrated Dillon stands in the ring in disbelief.

After the match, Flair hugs Dillon while Jim Crockett extends his hand in appreciation of his hard work.

Conclusion: While this was a good if not great show, the cracks in the foundation of the promotion were beginning to show. As I examined the crowds in Chicago throughout 1987, it was a no-brainer as a choice to host Starrcade; however, booking a Dusty finish AGAINST the hometown heroes was beyond baffling. Also, Dusty’s going over Luger at least was part of a long-term story but seemed inexcusable by itself. And, on top of that, career curtain-jerker/midcarder/crossdresser Ron Garvin was the ONLY idiot willing to be a transitional champion so that Flair could regain the title at this show. That says a lot when Jimmy Garvin could have been a better candidate due to the Precious angle. I’m looking forward to 1988, but my joy may be diminishing as JCP continues to shoot itself in the foot.

Lastly, it should be noted that Jim Crockett Promotions also held preliminary cards in Greensboro, NC and New Orleans, LA prior to showing the event on closed-circuit.

Comments? Suggestions? Send them to me at [email protected] and follow me on Twitter (@rockstargary202). Also please be sure to check out all of my reflections at rockstargary.com.