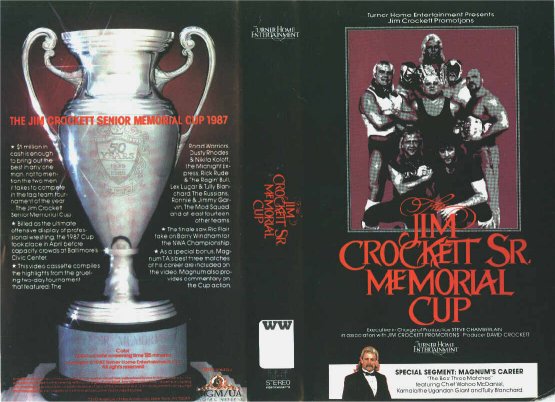 Instead of the early matinee followed by a night session like last year, Jim Crockett Promotions spanned the tournament over two nights (which probably involved truckloads of money to the Baltimore Marriott). Let’s start with the Friday night show. My reflection is based upon the home video for the show as I await a full-length copy on the WWE Network any day now.

After Tony welcomes us to the show, we get a sparkling introduction from everyone’s friend and yours, ring announcer Gary Michael Cappetta.

Summary: From what was shown, the crowd loved the hot tag spot, and Horner brought some high-flying making an upset seem possible.

Summary: If you can actually imagine, having a gimmick patterned after a children’s game wouldn’t be the worst gimmick for Hector.

Summary: The Armstrong curse was overcome because the Soviets destroyed their chances at the Cup.

Matches missing from the first round and their results:

Summary: The crowd loved the antics outside the ring, but inside this match was too severely clipped to enjoy.

After the match, the Garvins dispatch the Midnight Express. An angry Ron then decks Hebner. Somewhere Bret watched this and felt tremendous empathy.

Cappetta then announces Ricky Morton’s injury that eliminated the Rock’n’Roll Express. Shortly thereafter, teenage girls and perhaps Rob Feinstein allegedly leave the arena. Confirmation could not be made as of this writing.

Matches missing from the second round and their results:

Summary: In actuality, this was a better brawl than it seemed on paper. The Baltimore crowd was solidly behind Ole.

Tony then speaks with Magnum T.A. who still had his right arm in a sling. Included on the tape are three of the best Magnum T.A. matches in the promotion’s vault:

Summary: Terrible finish since Kamala didn’t do the job. On the other hand, the crowd loved Magnum.

After the match, Kamala charges at Magnum but hits Akbar instead. Immediately thereafter, Magnum slams the Ugandan giant. After turning his attention to Akbar, Magnum gets nailed from behind. He then reverses an Irish whip and delivers a belly-to-belly suplex to Kamala. Impressive!

Summary: If you look up the definition of method to settle a feud, this match fits it perfectly. While not a technical classic, it is a fight between two men who want to destroy one another. Magnum gets his revenge by taking back the US title, and Blanchard, for the remainder of his career, gets people to taunt him with “I Quit.” This match is a bona fide classic that every wrestling fan should witness, and is one of my all-time favorites.

Afterwards, Magnum offers support to the SuperPowers to win the tournament. Gee, what a surprise.

Summary: While I understand the need for a heel versus face dynamic for best crowd reaction, having the Road Warriors lose in the quarterfinals seems criminal.

After the bell, Animal gives Rogers a flying shoulder block that sends him reeling to the floor. Animal then whacks both Eaton and Lane with the racquet. As he and Hawk give Eaton their version of a Hart Attack, Lane pulls Eaton to safety. When Anderson raises Eaton’s arm in victory, Hawk nails Anderson. That’ll cost him. He then rams Eaton face-first into the ring post. As expected, the Baltimore faithful sing a resounding rendition of “BULLSHIT.”

Summary: While I understand the SuperPowers were a mega-team, putting them over the World champions in the quarterfinals made zero sense.

Summary: Despite losing, Brad looked good here. Unfortunately, the Armstrong curse foiled them as the Horsemen used shenanigans to advance.

Summary: Once again, the mega-team beat the well-established former champions. More on this later.

After the match, while embracing Nikita, Rhodes shouts “one more!” Bartender, the next one’s on Rhodes. Meanwhile, a livid Cornette throws a temper tantrum in the ring to plead his case.

Match missing from the semifinal and its result:

Summary: A Windham victory here would have made sense and solidly defined this show as historical. As it was, Flair and Windham told a fantastic story.

Prior to the final match, Cappetta introduces Magnum T.A. who requires assistance from Teddy Long to get to the ring. As you can imagine, the reaction from the Baltimore faithful is deafening. Magnum then embraces both Rhodes and Nikita. What an emotional moment. I don’t like the Horsemen’s chances.

Summary: Considering the Flair victory, did you think the Horsemen were taking it here?

After the match, Mrs. Crockett (Jim and David’s mother) presents the trophy and the $1 million check.

Conclusion: While the show’s format was better than last year’s, the following mistakes were made:

Dusty Rhodes was both a successful wrestler and booker. On the other hand, it’s booking decisions like this one that cause people to question his sanity. Tag team wrestling was never stronger than in the 80s, yet the SECOND tag team tournament had two make-shift teams in the finals. I’m still scratching my head on that one but will pass on the dandruff shampoo.

As far as a recommendation goes, it’s worth a look for the Magnum matches and the World title match, but unless you LOVE Dusty Rhodes, skip the rest.